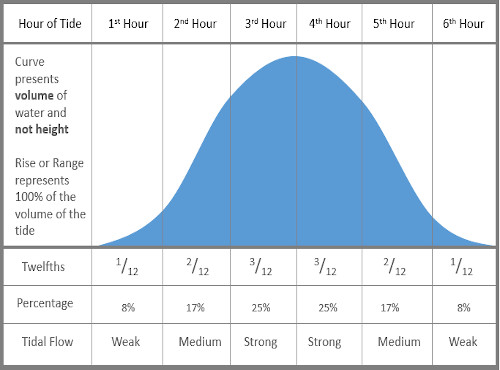 All boat owners understand that there are high tides and low tides, and most understand that having some idea of what the tides are doing is important. Not being aware of the water depth can cause boats to become stranded until the next high tide and in extreme cases can result in the grounding and sinking of a boat! At the very least, it is important to understand how tides work when attempting to navigate complicated areas of the coast.

When questioned on this topic, a lot of boat owners explain that a high tied happens each day and later in the day a low tied will follow. They believe the whole process is more or less linear, but the times seem to change. This understanding, intuitive as it is, misses some very important underlying processes that are at work.

High and low tides do change each day and are normally semi-diurnal, which means there are two high tides and two low tides each day. What is interesting though, is that in most places the difference between high tides is a predictable 12 hours and 25 minutes and the difference between high and low tide is approximately six hours and 12 minutes. It’s important to know this, because it means once you know the date and time of one high or low tide, you can work out each high and low tide that follows with great accuracy. This removes your reliance on tide books which some people forget to take and plotters that can malfunction.

However, tide movements are not linear. While the curve of a tide when plotted will be symmetrical, the rate of rise and fall is not constant. It’s important to understand the distinction. The rise and fall are instead best described by what has become known as the rule of twelfths.

There are two important implications to remember that result from the way tidal flows work. The first is that in hours three and four of a raising or lowering tide, the tidal flows will be at their strongest and will be much stronger than in hours one and six. In an area of particularly strong tides, this must be taken into consideration when deciding where to anchor and how to anchor. The specifics of that will be an article for another day.

The other implication is that a tide will begin to drop slowly but by hour three the rate of drop will be three times faster than it was in hour one. This must be taken into consideration when making decisions about when to leave and when to try and navigate shallow water. If you looked at the rate of drop in hour one and assumed you could wait until hour three to leave based on the change you observed, you could very easily end up running aground because you may significantly overestimate the depth of the water three hours later.

If you have any questions about tides or anything else related to your boat, you can always contact Volunteer Marine Rescue Gladstone